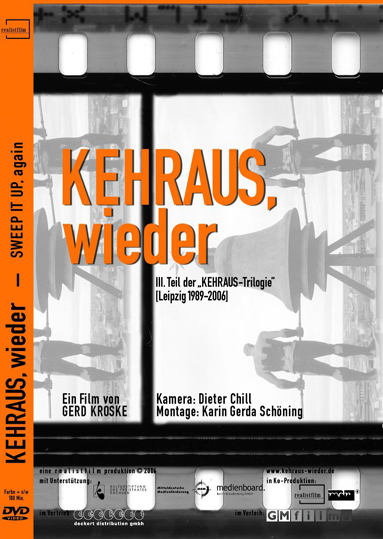 inceSixteen years ago, directly in the elections in winter  1990 Gerd Kroske filmed in the streets of Leipzig again. His road sweepers swept away what wasn’t needed any longer: posters, flags, cigarette butts, rubbish. The film „Sweep it up“ contained impressive images of the apocalyptical atmosphere in the GDR, between departure from yesterday and an arrival yet uncompleted.  Twice the film-maker returned to those men and women who had allowed him intimate views into their lives between casual work, jail and pub. 1996, in „Sweep it up, swig it down“ none of them still worked for the Leipzig department of city cleaning. And in 2006 too, in the third film „Sweep It p, Again“, their daily lives take place between homes and social security office.  Stefan and Marlen, two of the former protagonists, are dead. Gabi just tries to struggle along. Henry and Marion get by. The grandchildren live with foster carers and sometimes things get worse than one believed possible to bear.  „Sweep it up, again“ is a milieu study that has not fallen into the trap of cheap images and sentimentality: it is precise, sober, without commentary – but fill of sympathy with the protagonists. Gerd Kroske: „I began documenting their lives, if only because I hoped each film would have a happy ending.“

More about the TRILOGY here: