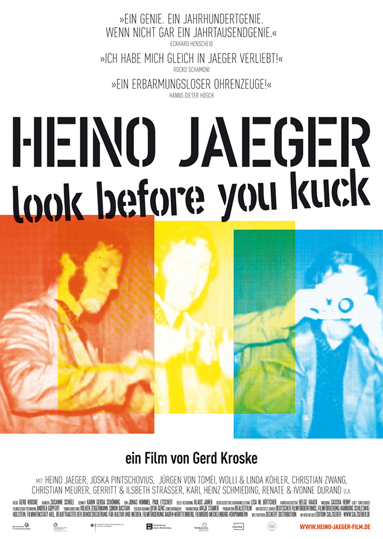 The German painter and cabaret artist Heino Jaeger was once a celebrated radio star. The radio recordings “Fragen Sie Dr. Jaeger/ Ask Dr. Jaeger” achieved cult status in the 70s. Nevertheless, this popularity seemed to “hurt” Jaeger as a painter. After ten years, he abruptly discontinued his broadcasting work and began to drink.

Weight down by a trauma from World War II and characterized by anarchic madness, but far being an eccentric, arrogant artist, Heino Jaeger died in a psychiatric ward in 1997 at the early age of 59. He spent his last twelve years there as an alcoholic schizophrenic. His paintings are very precise, ambiguous and contain a special irony. They usually depict a

fundamental examination of Germany`s state of being. The images are spiteful and bizarre, and

like that in their living room. The documentary shows the pictures, drawings, photographs, film footage, friends and colleagues

of Heino Jaeger, reporting on his life in a wealthy West Germany which left him behind. A film about an artist, through whom one can focus on German history like with a magnifying glass. Wars may end, but they cannot be overcome.